A photography tour of Angkor Wat 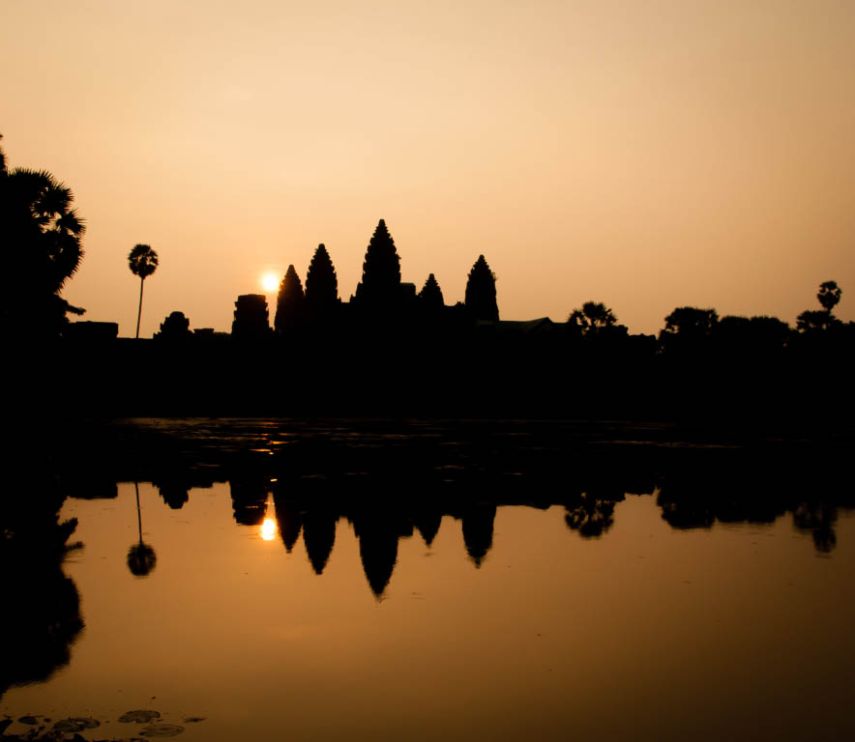 It was now or never. We needed to get a clean shot quickly, before the “snipers” moved in. Sure enough, as the monks waited patiently in a window frame amid the ancient Angkor Wat temple, the pair’s bright orange robes began to attract several nearby tourists like a lamp drawing in moths.

The monks and their colourful attire, set in front of the greyish temple walls and dark window and door frames, had what our photography tour guide, Nathan Horton, described as “visual mass” – a focal point in an image that grabs the viewer’s attention. As they sat patiently, they certainly were drawing in other travellers who weren’t on the tour, the snipers, as Nathan described them, keen to grab a memorable photograph on the sly, to shoot and run.

Quickly, then, our cameras on aperture priority, set at about f8, as advised by Nathan, auto white balance, ISO on automatic for those with newer cameras (mine was about six years old, much to my embarrassment, and had been set manually at 200) and, crucially, some exposure compensation to avoid what Nathan described as the cardinal sin of digital photography; blowing the highlights. The monks had settled into a meditative pose and … click click click click click – a whirl of camera shutter noises from the tour group, our own little flash mob of paparazzi, only here at Angkor, in northwest Cambodia, it wasn’t Hollywood celebrities leaving a restaurant that provided the “money shot”, but monks from the nearby wat.

Soon afterwards, a few non tour participants had moved in and were also lining up photos. Nathan was quick to approach them and explain that this was a private group and we had arranged with the monks to take their pictures.  One American woman was not convinced that she should not be allowed to take photos – this was a public place, after all. Well, she had paid her Angkor Wat entrance fees, like everyone else. Nathan calmly explained how he had built a relationship with the monks over many years, and he had paid them for their time.

“You’ve paid the monks?” she asked incredulously. Well, yes, we had paid the monks. At least, Nathan had paid them and we were to tip them more at the end of the shoot. Yes, they were our models for this brief time and the photos in which they featured were to prove just one of many highlights of the four-day travel photography tour of Angkor that I had joined.

A monk inside an Angkor Wat gate. Picture: Chris Mannolini

Was what we were doing bad karma? Was it somehow cheating to pay monks to be our photography props, like putting live fish in a barrel and then throwing in a line? One of the tour participants later told me he didn’t take photographs of the monks during these sessions for this reason, and focused instead on the architecture. I had no problem with the idea, and was happy to ride on the coat tails of Nathan’s long experience and relationship with the monks and nuns of Cambodia that he had developed over time. The money we gave was put to good use, providing the monks’ monastery with some welcome US dollars for food and books, among other things.

Seeing Angkor Wat and surrounding temples had been on my travel wish list for many years, but I wanted to make sure that, in the small amount of time I had to explore the Unesco world heritage site, covering 400 square kilometres, I saw all the highlights and returned home with memorable photos of the main temples, taken in the best light. Joining Nathan’s tour made both possible.

But the tour operator’s relationship with the locals was more than about money. Nathan, an Englishman and professional photographer, had been living in Cambodia for six years and said the monks trusted him to take images of Angkor as they would like it to be portrayed, as a spiritual place of worship.

The temples of the Angkor region date from the 9th century, with Angkor Wat itself built in the early 12th century as a temple to honour the Hindu god Vishnu.The following century, however, the region converted to Buddhism and Buddhist statues were added to Angkor. Today there are statues depicting both religions, with the majority of the originals in the national museum at Phnom Penh.

All the surviving temples of Angkor were built of stone or brick by the kings of the day for the worship of the gods and spiritual figures. Anything not to do with the deities, such as public buildings and houses, was built of wood and has long since disappeared. Hence, what is left is not only one of the largest archaeological sites in the world but also an important place of spirituality for the locals as well as visitors.

Earlier in the day we had woken at 4:30 and been driven to the Angkor grounds to secure the best spot to take the key “establishment shot” of Angkor Wat; sunrise from the western side, with the temple’s famous shape, which adorns the Cambodia national flag, silhouetted by the sun rising in the east. Nathan had led us to the best position so that the iconic image was also reflected in pools surrounding the temple, and we had staked out our turf with tripods,using torches in the pre-dawn dark. As the sun rose, we took shot after shot as the sky went through a range of colours, with Nathan on hand to answer questions and suggest when to switch from manual to auto focus, for example, and when to shift from flourescent white balance (which added a bluish effect to an otherwise dull grey light) to shady (giving a warmer light to the sky as the sun rises).

As well as knowing the photography tips, Nathan also knew how best to avoid the worst of the crowds.

As well as knowing the photography tips, Nathan also knew how best to avoid the worst of the crowds. So a stop for breakfast at the nearby restaurants allowed us to miss the surge of travellers who streamed into the Angkor Wat grounds straight after sunrise (there were hundreds just lining the pool with cameras and tripods by the time the sun had risen).

After breakfast of omelette and pancakes, we followed Nathan to meet the monks at the neighbouring wat, or monastery, were blessed by the head monk (cost, an offering of $1) and then headed off with two of the monks and a young pint-sized novice who proved quick with a smile but also a sharp word to a non-tour group tourist who hassled his friends.

Angkor Wat is one of the largest single religious buildings in the world. There is much to take in, but on this day we didn’t have time to appreciate it all, such as the fine stone bass-relief carvings surrounding the temple that depict the epics of Hindu mythology. Fortunately, I had time in Siem Reap after the photo tour for a return visit.

The monks in this magnificent setting provided plenty of memorable moments, as they were instructed by Nathan on where to stand so we could put to practice what we had learnt about travel photography during a lesson on the basics on the first morning of the tour, including light, aperture settings, and composition techniques such as reflections (a monk placed as the focal point of an image is “reflected” by a second monk elsewhere in the frame, for example) and rule of thirds. There was a lot to think about, in a short space of time. As well, the monks needed to be looked after (we couldn’t keep them in the hot sun too long) and we didn’t want to draw a crowd.

A three-day Angkor Wat pass for $25 covered our entry to Angkor Wat as well as other areas such as Ta Prohm, where the jungle’s trees and roots wrap themselves through and around the buildings and walls, while on the fourth day we head to Beng Mealea, another temple left to be ravaged by jungle growth and which is not covered in the Angkor pass, for which we pay another $5 for a single entry.

The fourth day of the tour included a morning of post-production tips, where Nathan showed us how to use software to get the best out of our digital photographs, the raw files we had been accumulating out in the field, one of the most impressive photo “studios” you could imagine.

The four-day tour I had joined was part of a longer expedition covering other parts of Cambodia. As Nathan and the participants on that tour left for its next stop, Battambang, the following day, I stayed in Siem Reap and was able to return to Angor Wat to see some parts not visited and take some wide-angle shots I had missed out on taking during the tour when my camera had run out of battery power. (The lesson from that: always recharge camera batteries each night during travels.)

The tour had taken in the best sights of Angkor, provided a few locals to pose as we practiced some photo techniques and gave us the confidence to take what we had learnt into the rest of Cambodia and the wider world. Tipping monks for their time and patience? Money well spent.

You can see more of my photographs taken in Cambodia during this trip, including on Nathan Horton’s tour, on my Flickr site here.

Would you pay locals to take their photograph? Do you think that’s cheating? Or is it showing respect and appreciation? I would love to hear your thoughts.