Chasing light … and hiding from it

Photography is all about light: chasing it, and sometimes trying to hide from it.

Sometimes you arrive at a spot or moment that you want to capture, only to find the light not playing along. What can you do?

While I have travelled in the southwest of Western Australia many times, and thought I pretty much knew the are between Cape Naturaliste and Cape Leeuwin, better known as the Margaret River region, I was transfixed by a photograph of Sugarloaf Rock by local photographer Christian Fletcher during a visit to his studio in Dunsborough. As luck would have it, I discovered this scene was just a 10-minute drive away from where I was staying near Dunsborough.

That afternoon I drove out with camera at the ready. The weather was pretty wild, very windy, dark clouds with moments of sunshine, big swell and waves pounding the rocks. The only problem photographically was that Sugarloaf Rock is on the west coast, just south of Cape Naturaliste. I was looking into the sun, with the side of Sugarloaf closest to me in shadow. Nevertheless, it was an impressive scene and I took a few snaps, hoping to capture the ruggedness and stormy atmosphere. But I decided I had to come back in the early morning to capture the rock at its best.

Sugarloaf Rock on the second morning of my trip.

The next morning, fairly early, I was back with camera and tripod. I wanted to capture the sturdiness of the rock amid the still quite choppy and chaotic surf. That meant an exposure of a second or more to photograph the movement of the water. I was too late. Too much light meant I couldn’t keep the shutter open long enough without blowing out the sky. Oh for a ND filter or ND grad. Not having either, I decided, yes, mornings are good, but I need to be in the same spot slightly earlier.

So the next day I was back, just after sunrise, sea still fairly angry that day my friends (excuse the Seinfeld reference), still some big waves surging past the rock itself and into the rocks of the coast. But the light was increasing rapidly due to a fairly cloudless morning. I found the spot I had scoped out on the previous day, set up my tripod as quickly as possible and fired off several shots, finally getting some shots that reflected the one I had in my mind. It had taken three visits to the area, but I was finally satisfied.

Lo and behold, my favourite shot from the three days was one I took on the first day, lo0king into the sun. One had some sun bursting through a break in the clouds and throwing a nice sheen on the whitewater around the rock and on the sea in the background. I played around with it in Adobe Lightroom and converted it into a black and white image – to me that treatment best reflected the stormy weather of the early part of my trip and my first view of Sugarloaf Rock.

The motto of the story? Well if there is one, it is; If at first you don’t succeed, you actually may have so don’t worry. Also, buy an ND filter if you want silky water movement effects in your landscape photography. Movement can bring to life an otherwise still landscape. And don’t rule out black and white to best convey what is a colourful world out there. 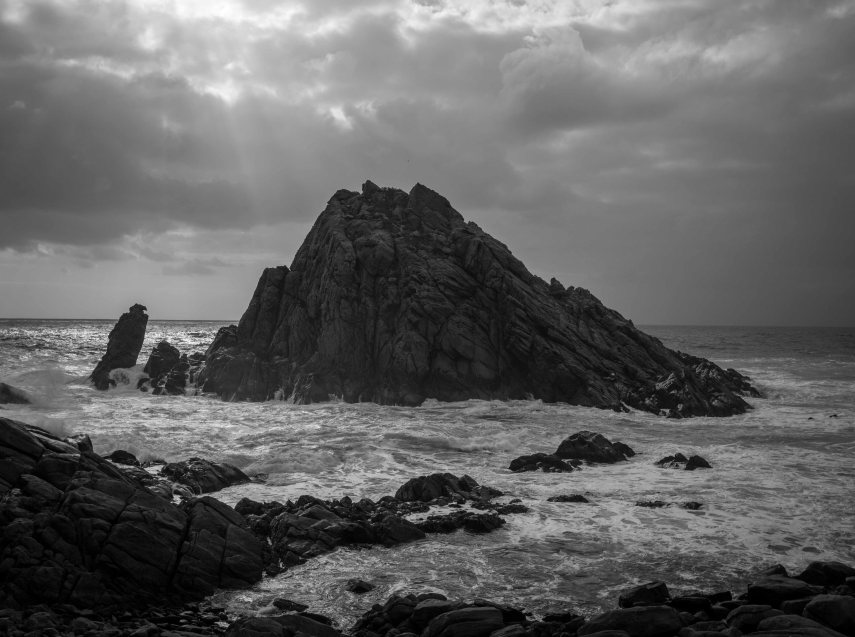 Have you been to Sugarloaf Rock? Do you use ND filters or ND graduated filters? And which of the three photographs posted here do you prefer? I would love to hear your tips, advice and thoughts.