Fog and sunshine in rural Laos

A village scene in northern Laos, as the morning fog burns off to reveal the nearby mountain. Picture: Chris Mannolini.

The fog rolls in and covers the northern Laos riverside town of Nong Khiaw each morning during winter. You awake to the early morning sound of the first motorised fishing boat puttering its way down the Nam Ou river, and see it disappearing into the pea-soup thick mist.

Somewhere out there are spectacular karst hills and cliffs, but they won’t appear again until mid-morning, at the earliest. Time for a leisurely breakfast and coffee, then it’s down to the river to board one of the boats that has been commandeered by the tourism industry.

There are a number of tour operators in and around this small town, which seems to have several spellings, sometimes Nong Kiau, as in my accommodation during my stay (Nong Kiau Riverside). I’ve joined a one-day tour that travels down the river by boat for an hour or so and then visits several villages in the countryside. 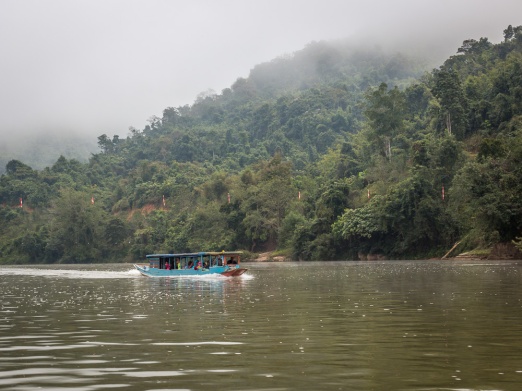 I’m hoping for some photos of the lush hills and cliffs along the way, but amid the morning fog this is impossible. Instead, our boat – carrying the boatman, a young and talkative local guide, two Chinese women from Hong Kong and I – pulls up on the shore of a village and we climb up the steep and sandy embankment.

We are suddenly amid a rural scene seemingly untouched by the 18th, 19th or 20th centuries, let alone the 21st, with pigs wandering the tracks or tied in pens, chickens and ducks roaming freely and women wearing the iconic conical hats associated with this part of the world and carrying baskets and buckets on a pole or heavy sacks on their shoulders.

As we’re taking in the scene, the sun beaks through the fog and cloud and, moments later as I’m lining up a shot of a street scene, suddenly the sky is a vast dark blue, save for a river of cloud flowing around the peak of a distant lush mountain. It’s one of the most memorable scenes of my trip to Laos.

Most of the children of the village are at school, and as we walk past we find them all on a break, playing ka-taw (like volleyball, but played using your feet only) or sitting in the sunshine. They all look extremely happy – surely they’re only this happy at school when they’re on their break – and welcome us in to watch them play or to take our photos.

A quick game of ka-taw during a break from school in a village in northern Laos. Picture: Chris Mannolini

We set off on foot for another village in the countryside where we will have lunch. The sun warms quickly and after half an hour or so of walking we feel exhausted and hot. The guide says the village is probably another hour or so on foot, almost sparking a revolt from the two Chinese women. I’m not all that happy with the news either, carrying a heavy camera, but we all soldier on, stopping occasionally in the shade or small trees along the way to sip our water. The countryside is suddenly quite open, with little shade, which doesn’t help matters. Finally we reach the main village, that’s much bigger than the others we have seen, almost as big as a town, actually. We sit down at a shaded set of tables and chat with a small group of other travellers from another group. They’re just finishing their lunch and set off as our lunch of rice and fried meats arrives.

As it turns out, we catch up to this group on our walk back towards the river, which thankfully becomes more shaded as the track heads back in through vegetation. It’s also not that far to walk until we’re back at another section of the river, where our boatman is waiting for us.

The sun is sinking towards the west as we motor back towards Nong Khiaw in the same direction. It means it’s hard to take photos of the spectacular scenery, this time because of the sun rather than fog. I’m limited to shooting behind the boat, which isn’t as interesting. I find that my best photos of the Nong Khiaw scenery and the daily boat life can be taken from the balcony of my bungalow at my hotel, the Nong Kiau Riverside Bungalows.

Equipment and trip notes: As mentioned, there are countless tour operators in Nong Khiaw, on both sides of the river. I booked mine with an operator across the river from town, a little past the Nong Kiau Riverside turnoff, on the right. Next time I will note the actual name. The tour was for a full day trekking past several villages, with lunch included. It turned out a long trek. Luckily I put my 50mm prime lens on the Canon 5D, which was a good choice because it covered both street and portrait photos, as well as landscapes. Carrying heavy zoom lenses on such a long walk would not be recommended. When the fog lifted, the sun was hot .. and this was mid-winter!

You can see more of my photographs of Nong Khiaw and surrounds, and my trip to Laos, at my Flickr site here.

Have you been to Nong Khiaw and been fogged in during the morning? Perhaps you’ve visited at another time of the year. I’d love to read your comments.